Where was all of this “smart” stuff back when I was younger? With everything getting smart, the generation that follows us seems to have a good advantage, especially when it comes to learning new skills such as an instrument.

For example, when I was teaching myself guitar, I relied on books and guitar websites to learn the fine art of reading tablature. That’s a bit of sarcasm there. There was no widely accessible YouTube as there is today, so finding instructional videos wasn’t as easy for aspiring rock stars. Furthermore, there were definitely no smart guitars, at least that I was aware of or that I could afford on a high school student’s salary working part time at my local Ace Hardware.

My point is, these dang kids don’t know how good they got it. Also, get off my grass!

Poputar T1, the first smart guitar I’m aware of, launched an Indiegogo campaign this week, priced at a pretty darn reasonable $259+. The company behind it, PopuMusic, has released similar instruments before, such as the Populele U1, a smart ukulele. Because the company already has an established product, think of this crowdfunding campaign as more of a pre-order and not a way for the company to actually raise funds to produce the instrument. Their “goal” is a mere $6K which they’ve already well surpassed.

To be clear, when we call it a “smart guitar,” the instrument doesn’t play itself, but instead, is designed to make learning the instrument much more easy for newcomers. Obviously, people have been learning the guitar without the help of a smart guitar for a very long time, but the way I see it, there’s nothing wrong with something like Poputar to help those make the learning process a bit more fun, and dare I say, cool.

The way the system works, being the guitar itself and an accompanying app, is pretty easy to jump into. You turn the guitar on, which powers up the neck’s builtin LED system, then pair it to an app that runs on your phone. From here, you can do all sorts of things to help you learn, such as see chords visualized on your neck and play along with songs in a gaming mode complete with leaderboards. As a use case example, let’s say you want to learn a G chord. Inside the app you can go into the Chord Chart tool, tap on G, and then the guitar’s neck will light up the position of the G chord. Same goes for any other chord you can think of.

What I’ve found to be most intriguing as an advanced player and not a beginner is the ability to light up the fretboard manually with a scale, such as a pentatonic scale, then tossing on a blues backing track in a particular key and just having some fun. Given the LED lights are lit up on notes in that scale, I can go up and down the neck without missing a beat or going off key. After all, if you want to sound like one of the greats, simply play the pentatonic.

The app itself is pretty well made. Pairing the instrument to the app is easy enough, which is important if you want to manually set the LED lights. There is also useful tools built into the app like a guitar tuner, chord chart, and metronome. As a beginning guitarist, believe me, you’re going to want these things.

As previously mentioned, there’s the ability to access a song library which plays like a game of Guitar Hero. The app teaches you the chords, then dives you into a song with the goal being to learn a bunch of different popular songs as quickly as possible. While sometimes a bit buggy in terms of sound recognition (I’m testing a beta version of the app), it’s actually a good bit of fun. There’s a countdown and then you’re shown the chords and a strum pattern (up and down arrows) that plays along with a backing track of whichever song you’re learning.

There’s plenty of hits in there, with tunes from The Beatles, Guns N’ Roses, and plenty others. For now, most are just clips from the song, which makes sense considering pop songs merely repeat for the most part, so having entire tracks isn’t necessary. All you need to learn are the chords (mostly four chords at a time) and you’re off to the races. 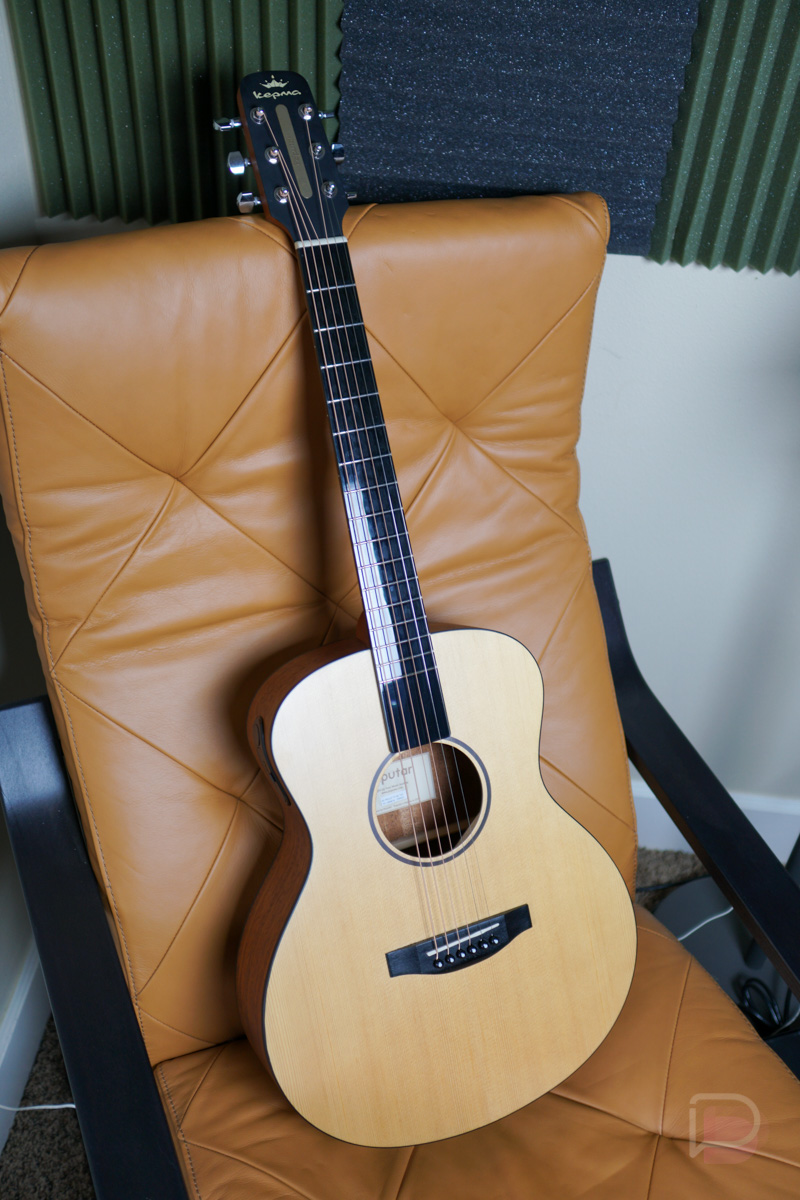 Now, as for the guitar hardware, the saying goes, “You get what you pay for.” This is not a Gibson or a Martin. The quality of the instrument will not blow you away, but it’s plenty decent for someone who is new to the guitar. Furthermore, the fact that it actually plays and sounds decent, even while having a hard plastic fingerboard to cover its LED lights is pretty impressive. Believe me, I’ve played on worse, but just know that this instrument is certainly designed for someone who intends to quickly learn guitar and then possibly make an upgrade if they plan to stick with it.

According to the campaign’s page, leaving behind a small environmental footprint was important in the making of the instrument. Numbers wise, they used 100% recycled copper and stainless steel in the strings and tuners, 100% recycled artificial wood in the body of guitar, as well as 50% or more recycled ABS plastic in multiple components. So even though the guitar is literally cheap, you can at least feel good that a ton of resources weren’t wasted in its creation. 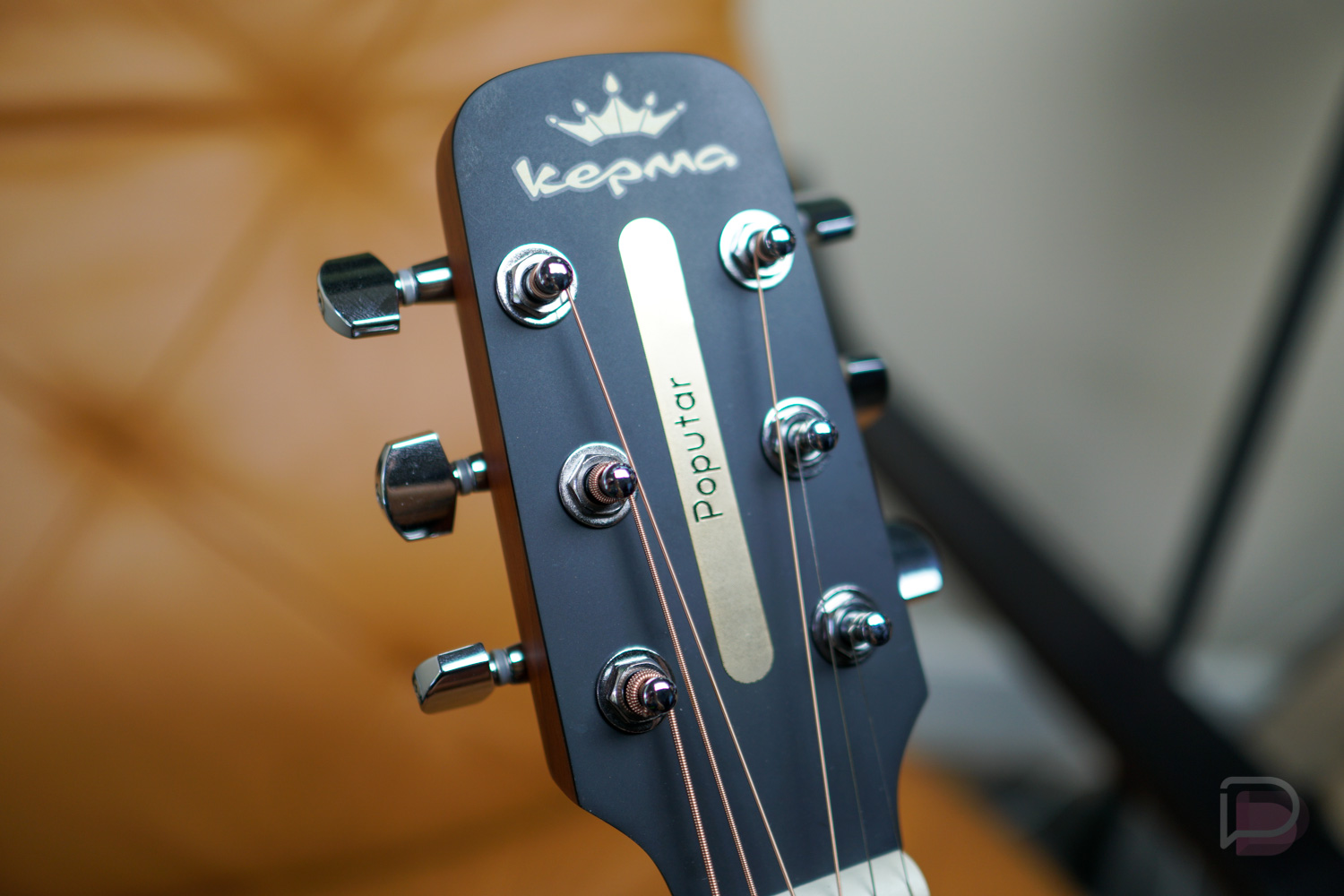 The guitar features an Omega-II Piezo pickup, complete with 1/4″ output jack rested inside of the guitars bottom strap button. You’ll find a slot for the pickups 9V battery also on the bottom. On the outside top portion, there’s another battery slot (2 AA) that powers the Bluetooth connectivity and LED lights.

If you or someone you know is thinking about picking up the guitar for the first time, I recommend Poputar if you want to take a different approach to the instrument. There’s nothing wrong with the old way of learning, but with this smart guitar, it can actually be a bit of fun. I know this is true because my fiancee, who has very little experience with guitar, was having a blast as she tried using the gaming feature inside of the app. If a beginner can use it and have fun while learning, I think it’s mission accomplished.